8 Steps Toward Incorporating Equity in Rapid Reviews and Guidelines

Along with the mass mobilization of systematic reviews of evidence ushered in by the COVID-19 pandemic was also the need to synthesize evidence and disseminate results as rapidly as possible. As part of the process of formulating guidelines based upon rapid reviews, the impact of decisions and policies on equity should be considered. In a newly published paper, Dewidar and colleagues provide specific steps for incorporating stakeholders and improving the consideration of equity in the context of rapid guidelines.

The project was part of work conducted by the Equity Task Force of the global COVID-19 Evidence Network to support Decision-making COVID-END) network. The team was diverse in terms of the gender (70% women), regions (17% from low-middle-income countries), and career stages (40% early career) represented. The resulting guidance was created in line with the steps outlined in the Cochrane Handbook's chapter on equity and followed the PRISMA-Equity (PRISMA-E) extension for reporting. The team then identified published systematic reviews related to COVID-19 that focused on populations experiencing inequities as categorized by the PROGRESS-Plus paradigm - for instance, by Place of Residence (health systems in rural areas and their preparedness for outbreaks), Education (the impact of educational attainment on adherence to COVID-19 health guidelines), and Disability (the impact of COVID-19 on those with disabilities) - for examples that review authors can incorporate equity into their own reviews.

The authors conclude that greater involvement of diverse stakeholders can encourage the consideration of more diverse social factors in the development and interpretation of systematic reviews and resulting guidelines and policies. Rapid reviews also benefit from having a translation plan that includes methods for disseminating findings in a way that is consistent with the goal of reducing inequities.

Posted by Madelin Siedler at 12:15 PM

On March 4-6, 2020, the U.S. GRADE Network held an in-person workshop in Phoenix, Arizona, much like any of the 11 workshops to have come before it. Participants and facilitators enjoyed a taco buffet bar together at the first night's reception, sat together in small and large rooms to learn and collaborate, and mingled over coffee and pastry refreshments during breaks.

Over that summer, the USGN took our workshops online, hosting three consecutive fully virtual workshops in October 2020, May 2021, and October 2021. While some changes were made (the addition of multiple, 45-60 minute breaks, for instance, to accommodate eating times in multiple time zones), much of what lay at the heart of a GRADE workshop remained: a three-day format  including plenary lectures from PICOs to recommendations, presentations by Evidence Foundation scholars, and small-group, hands-on experiential learning opportunities.

The USGN's shift to an all-virtual setting, and its challenges as well as opportunities for growth, are presented in a new paper by Siedler and colleagues published online in the BMJ Evidence-Based Medicine journal. Using routine feedback survey data collected both before and after the pandemic, the authors (all GRADE workshop facilitators) found that... 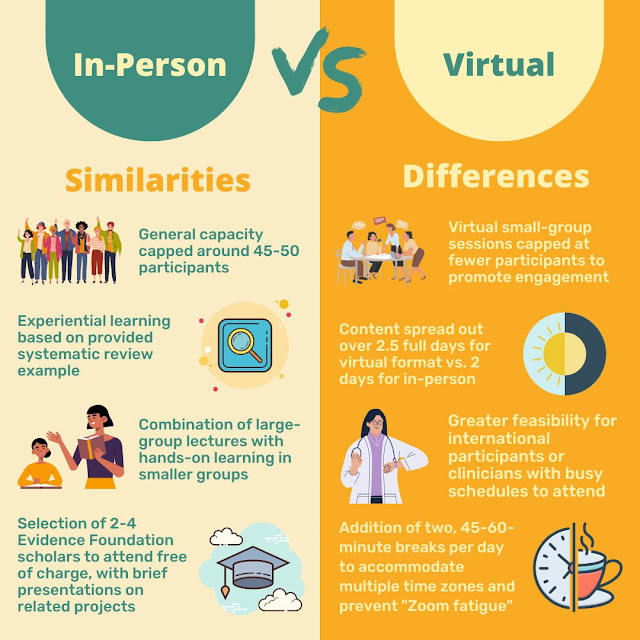 The major takeaway from the USGN's experience in an all-virtual format is that, based upon positive feedback and the ability to reach a global audience of learners, it will continue to offer learning opportunities in a virtual setting this year and beyond.
In fact, the next all-virtual workshop will take place November 30-December 2, 2022, and registration is now open at www.gradeconf.org.
Siedler MR, Murad MH, Morgan RL, et al. (2022). Proof of concept: All-virtual guideline development workshops using GRADE during the COVID-19 pandemic. BMJ Evidence-Based Medicine (online before print). Manuscript available from publisher's website here.

Use of an Evidence-to-Decision Framework is Associated with Better Reporting, More Thorough Consideration of Recommendations

In the guideline development process, a panel should use a defined framework to consider multiple aspects of a clinical decision, including but not limited to the certainty of the underlying evidence, potential impact on resource use, or variability in the values and preferences of patients and other stakeholders. Such frameworks include the GRADE Evidence-to-Decision (EtD) format as well as others such as the "decision-making triangle" and Guidance for Priority-Setting in Health care (GPS Health).

To better understand the prevalence and use of these various frameworks within guidelines, Meneses-Echavez and colleagues systematically searched for guidelines and related guideline production manuals published between 2003 and May 2020. Items were screened and extracted by two independent authors, with a total of 68 full text documents included and analyzed.

Of these documents, most (93%) reported using a structured framework to assess the certainty of evidence, about half (53%) of which used GRADE or adapted systems based on GRADE (10%). Similarly, 88% of documents reported using a framework to rate the strength of recommendations, with about half (51%) using the GRADE approach. However,  only about two-thirds (66%) of the included documents explicitly stated the process for formulating resulting recommendations.

Finally, the GRADE framework  was most commonly used for the evidence-to-decision, being cited in 42% of the included articles, with other reported frameworks including NICE (8%), SIGN (8%) and USPSTF (4%). Articles using the GRADE EtD framework reported considering more criteria than those using alternative approaches. The most commonly used criteria across documents included desirable effects (72%), undesirable effects (73%), and the certainty of evidence of effects (73%); the least commonly applied criteria were acceptability (28%), certainty of the evidence of required resources (25%), and equity (16%). 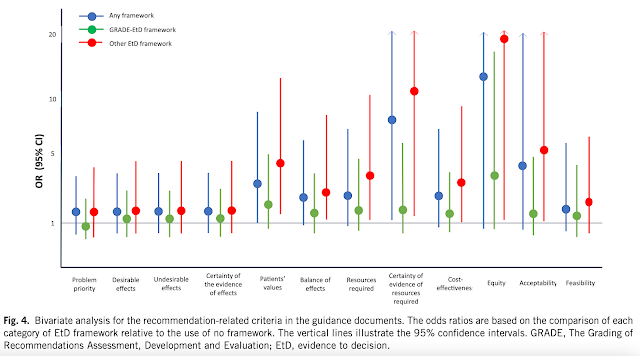 The use of any EtD framework was associated with a greater likelihood of incorporating perspectives (odds ratio: 2.8; from 0.6-13.8) and subgroup considerations (odds ratio:7.2; from 0.9-57.9), as was the use of GRADE compared to other EtDs (odds ratios: 1.4 and 8.4). These differences also affected whether justifications were reported for each judgment as well as the inclusion of notes to consider for the implementation of recommendations and for monitoring and evaluating recommendations.

The authors conclude that guidance documents stand to benefit from the more explicit reporting of how recommendations are formulated, from the initial grading of the certainty of underlying evidence to the consideration of how recommendations will affect various criteria such as resource use and equity. These changes, in the words of the authors, may "enhance transparency and credibility, enabling end users to determine how much confidence they can have in the recommendations; facilitate later adaptation to contexts other than the ones in which they were originally developed; and improve usability and communicability of the EtD frameworks."