New GRADE guidance on assessing imprecision in a network meta-analysis

Imprecision is one of the major domains of the GRADE framework and is used to assess whether to rate down the certainty of evidence related to an outcome of interest. In a traditional ("pairwise") meta-analysis which compares two intervention groups, exposures, or tests against one another, two considerations are made: the confidence interval around the absolute estimate of effect, and the optimal information size (OIS). If the bounds of the confidence interval cross a threshold for a meaningful effect, and/or if optimal information size given the sample size in the meta-analysis is not met, then one should consider rating down for imprecision.

In the context of small sample sizes, confidence intervals around an effect may be fragile - meaning they could be changed substantially with additional information. Therefore, the consideration of OIS along with the bounds of the confidence interval helps address this concern when rating the certainty of evidence to develop a clinical recommendation. This is typically done by assessing whether the sample size of the meta-analysis meets that determined by a traditional power analysis for a given effect size. 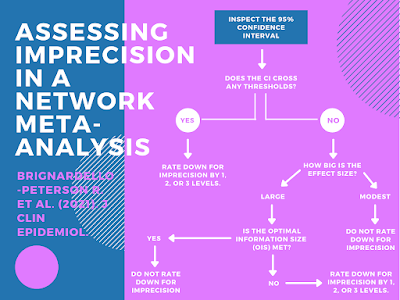 A new GRADE guidance paper lays out how to assess imprecision in the context of a network meta-analysis: