A Blinding Success?: The Debate over Reporting the Success of Blinding

While the use of blinding is a hallmark of placebo-controlled trials, whether the blinding was successful - i.e., whether or not participants were able to figure out the treatment condition to which they have been assigned - isn't always tested, nor are the results of these tests always reported. The measurement of the success of blinding in trials is controversial and not uniformly used, and the item has been dropped from subsequent versions of the CONSORT reporting items for trials. According to a recent discussion of the pros and cons to measuring the success of blinding, only between 2-24% of trials perform or report these types of tests.

As Webster and colleagues explain, the benefits to measuring the success of blinding are as follows:

Reasons commonly given against the testing of successful blinding include the following: 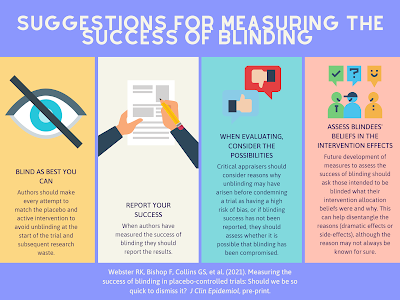 Webster RK, Bishop F, Collins GS, et al. (2021). Measuring the success of blinding in placebo-controlled trials: Should we be so quick to dismiss it? J Clin Epidemiol, pre-print.
Manuscript available from publisher's website here.
Posted by Madelin Siedler at 1:00 PM