Network meta-analysis (NMA) is supposed to increase precision (because it includes more studies in the analysis); however, this is not always the case. This empirical study evaluated 915 possible treatment comparisons. The study used the recently proposed borrowing of strength statistic, which quantifies the percentage reduction in the uncertainty of the effect estimate when adding indirect evidence to an NMA 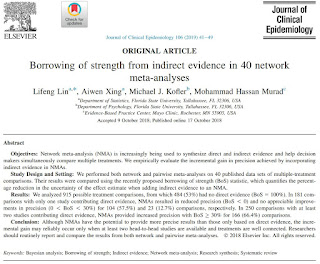