UpPriority: A new tool to guide the prioritization of guideline update efforts

The establishment of a process for assessing the need to update a clinical guideline based on new information and evidence is a key aspect of guideline quality. However, given limited time and resources, it is likely necessary to prioritize clinical questions that are most in need of an update from year to year. A new paper demonstrates proof of concept for the UpPriority Tool, which aims to allow guideline developers to prioritize questions for guideline update.
The tool comprises six different items when assessing the need to update a given recommendation or topic of guideline:
To apply this tool in a real-world setting, the authors took a sample of four guidelines published by the Spanish National Health System (NHS) within the past 2-3 years and which utilized the GRADE framework. A survey was then developed in order to assess the above six items, calculate a priority ranking, and from there, decide which questions were in highest need of updating. The survey was disseminated among members of a working group comprising members of the original guideline and additional content experts. Additional factors for consideration included the volume of new evidence, the availability of resources, and the need to include new clinical questions. 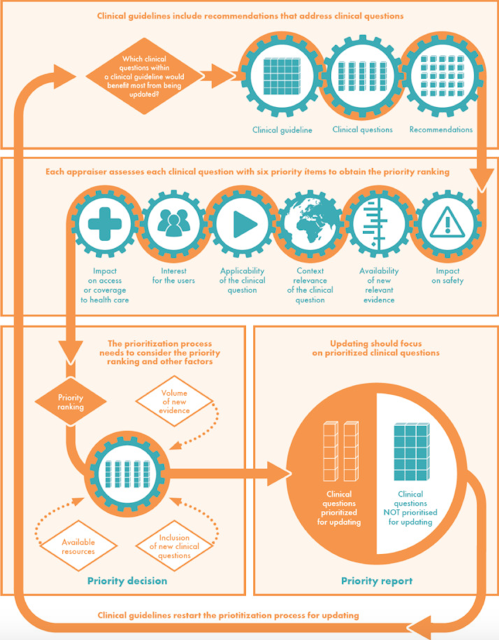 Through this process, a total of 16 (15%) of the 107 questions were defined as high priority for updating.  Of these, 12 were given a score higher than five for one of the individual items (specifically the item assessing an impact on patient safety), while the remaining four received an overall score higher than 30 across all six items.
In addition to the priority ranking derived from the six assessment items, the survey also assessed the usability and inter-observer reliability of the tool itself. The reliability (intra-class correlation) ranged from good in one guideline (0.87) to moderate (0.62 and 0.63) in two guidelines and poor (0.15) in one. The authors conclude that the identification and proper training of content experts to serve as appraisers remains the key challenge for the efficacious application of this tool.
Sanabria, A.J., Alonso-Coelle, P., McFarlane, E., et al. (2021). The UpPriority tool supported prioritization processes for updating clinical guideline questions. J Clin Epidemiol (in-press).
The manuscript can be accessed here.
Posted by Madelin Siedler at 1:00 PM