Patient-reported outcome measures, or PROMs, allow clinicians and researchers to directly elicit information about treatments that are important to patients, such as side effects or improvements in pain, function, or quality of life. In order to interpret changes in PROMs relative to a clinical recommendation, however, a minimal important difference (MID) - or the smallest possible change in the outcome that would mandate a change in the patient's management - must be determined.

Luckily, a wealth of published studies exist to provide a library of MIDs for a wide range of outcomes, and recently, a review published by Carrasco-Labra and colleagues synthesized these works together. The study included any empirical reports of MIDs in adolescents or adults that used an anchor-based approach, in which MIDs are based on an observed change related to an external criterion rather than the distribution of a particular patient sample. As such, anchor-based MIDs tend to be more directly applicable across patient populations. Ultimately, a collection of 585 studies reporting on 5,324 MID estimates across 526 distinct PROMs was presented.

About two-thirds (66%) collected MIDs related to patients' improvement, whereas about one-third (31%) addressed MIDs related to worsening or assumed the MIDs for improvement or worsening would be the same. Most (88%) were based on a longitudinal design in which patients' reported outcomes and satisfaction were measured at multiple timepoints. The most common types of anchors used were global ratings of change (59%), change in disease-related outcome (23%), and comparison with another group (11%), whereas the most common sources of anchor information were self-report (83%) proxy-reported (9%) and laboratory data (3%). 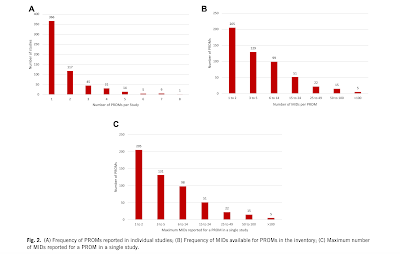 MIDs are essential in interpreting the magnitude of an effect from a study or systematic review of evidence, especially when assessing imprecision as part of GRADE. They can also allow researchers to conduct "responder analyses" based on subsets of patients who experience a change in an outcome beyond a given MID. Finally, reporting mean differences in units of MIDs as part of a systematic review can standardize interpretation of an effect size in a way that may be less problematic to interpret than a traditional standardized mean difference (SMD).

The work corresponds to PROMID, a project to develop an inventory of MIDs across the literature, which can be accessed at https://promid.mcmaster.ca/.