Registration of Trials Included in Systematic Reviews Has Improved Over Time, but Remains Under 50% for Most Years

The prospective registration of a randomized controlled trial (RCT) can reduce bias by clearly laying out the methods to be used before the research is conducted and data analyzed. Registration can also help limit unintentional duplication of efforts, which can be seen as an ethical charge, as duplication of research may mean duplication of unnecessary potential risks to participants and a failure to properly disseminate the findings of research. In 2004, the International Committee of Medical Journal Editors (ICMJE)  recommended that journals only consider publishing results of a trial that was prospectively registered.

A new study by Lindsley and colleagues set out to examine just how many RCTs included in a sample of systematic reviews were properly registered, and if so, whether the registration entry was updated with results of the trial. From a group of 618 systematic reviews published within the Cochrane Musculoskeletal, Oral, Skin and Sensory (MOSS) network between 2014 and 2019, between a total of 100 eligible reviews were randomly selected from each of the network's eight groups (30 from the Eyes and Vision group, which provided the pilot data, and ten from each of the remaining seven). 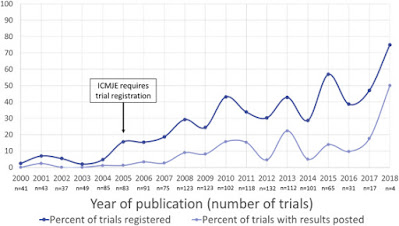 Overall, the authors found that while trial registration has become more common since 2005, it still tends to make up the minority of trials included within systematic reviews of this area. In addition, only about 10% of trials examined had updated the registration record with results related to safety or efficacy. Much room for improvement remains in terms of increasing and incentivizing the prospective registration of trials and update of information with publicly available results.