Since the inception of GRADE two decades ago, GRADE methodology has needed to evolve along with the arrival of new ways of assessing the evidence. One such evolution has come with the introduction of methods for assessing risk of bias for non-randomized studies, such as the Risk Of Bias In Non-randomized Studies (ROBINS-I) and the RoB Instrument for Nonrandomized Studies of Exposures (ROBINS-E).

A rating by any other name…

In order to determine what exactly this new three-level reduction should be called, members of the GRADE Working Group conducted a survey of 225 participants recruited via social media, the Guidelines International Network (G-I-N), and other sources. Just over one-third (34.2%) were members of the GRADE Working Group and all respondents had participated in guideline development in some capacity. The results are presented in a newly published article as part of a new “GRADE Notes” series in the Journal of Clinical Epidemiology.

Within the survey, participants were asked to rate the following terms for this novel three-level reduction, from least (1) to most-favored (4): 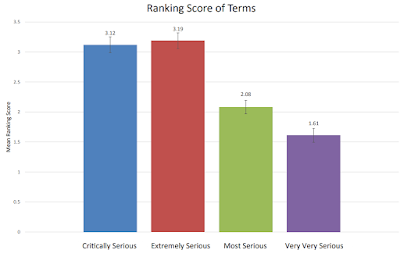 “Extremely serious” took the lead as the most favorably ranked term with an average score of 3.19, with “critically serious” a close second at 3.12. Respondents found “extremely serious” the most agreeable due to its clarity and the fact that it seemed to “naturally” follow the existing two-level term, “very serious.”

The term “extremely serious” can now be found within the GRADEpro application when rating the certainty of evidence within non-randomized studies while utilizing the ROBINS-I or ROBINS-E instruments.

Manuscript available here on publisher's site.
Posted by Rebecca at 9:25 AM